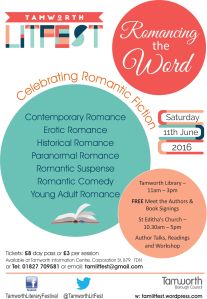 Doing anything on Saturday June 11th 2016? Why not join us celebrate the wonderful world of romance with a selection of authors handpicked by LitFest. The event includes author talks and readings, a workshop and an informal ‘meet the authors’ event where you can have a chat and get your hands on signed books.

Entrance to the meet the authors event at Tamworth library is FREE. The author talks, readings and workshop – taking place in St Editha’s – are ticketed, priced at £3 each. Alternatively you can opt for the whole day ticket of £8.

Tickets are available from Tamworth Tourist Information Centre, Corporation Street, Tamworth (tel: 01827 709581). Or you can contact us directly (see Keep In Touch for email link).

Tamworth resident and lecturer in the Department of English and Drama at Loughborough University Sara Read will be appearing at Tamworth Town Hall to talk about her book Maids, Wives, Widows: Exploring Early Modern Women’s Lives 1540-1740.

Sara’s appearance on Wednesday 11th May 2016 from 7pm will be an opportunity for anybody who has an interest in the stories of everyday people, to hear tales of daily life as seen through the eyes of women during over two hundred years of history.

Tickets cost £3 and can be bought on the door on the night, in advance from Tamworth Information Centre, Corporation Street, Tamworth or by emailing LitFest directly (see ‘Keep in touch’ elsewhere on this website).

Are you a fan of BBC’s MasterChef? Do you love The Great British Bake Off? Then you’ll really enjoy our next LitFest event.

Taking place on Thursday 14th April at two locations in Tamworth, we’re sure you’ll find something to entertain you.

Authors include Julia Ibbotson author of ‘The Old Rectory: Escape to a Country Kitchen‘ and Vivian Khan author of ‘Khan’s Curry Kitchen’.

Both Julia and Vivian will be offering you the chance to taste their recipes and will be available for book signings.

Here’s a run-down of the day’s activities:

Tickets: £3 each (max. 20 spaces) for morning or afternoon. Alternatively, £5 for both sessions.

5pm – 8pm: The Tudor House will host a number of authors as well as providing a culinary demonstration, including:

No tickets required, but tickets purchased for daytime events can be redeemed for refreshments. 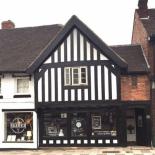 Thanks to all concerned.

Do your kids get over-excited in the run-up to Christmas? Do they need to let off some steam?

Let their creative sides loose and bring them along to our Festive Story Fun Day on Saturday 12th December between 11am and 3pm at St. Editha’s Church, Tamworth town centre.

The event – in collaboration with our friends at Dig-iT – will feature Children’s authors and illustrator, story workshops, Christmas crafts, storytelling, raffle and lots, lots more. Oh and it’s completely free to attend!

Here’s what we’ve got planned:

11:00am – Comictopia: Tamworth’s only Comic Book store – based in Lower Gungate, Tamworth – will be running a ‘Create a Festive Superhero’ workshop.

Midday – Amy Bradley: Illustrator of the bestselling children’s book Penguinpig will be doing a story workshop.

1:00pm – Margaret Clarke: local author and well-known Tamworth figure, Margaret will be leading an interactive story-telling workshop where the children will produce a story together.

2:00pm – Wanda Pierpoint-Jones: another local author and poet will be reading from her collection.

Between the sessions, we will have other fun activities and things to do and see:

Our raffle tickets cost 50p each or five for £2 and the excellent prizes are:

Huge thanks to all who kindly donated prizes!

So, why not drop in for some light relief, fun and entertainment. We’d really love to see you!

LitFest is pleased to announce that we’ve been invited to co-host an event with The Peel Society and author Dr Richard Gaunt at Tamworth’s historic Town Hall.

The event, on Tuesday 13th October between 7:00 and 9:00pm, will showcase the book “Peel in Caricature: The ‘Political Sketches’ of John Doyle” – edited by Dr Gaunt – which contains 149 hand coloured prints by the 19th century caricaturist ‘HB’ (John Doyle), 147 of them with an image of Sir Robert Peel.

Dr Gaunt, Associate Professor of Modern History at Nottingham University, will make a presentation on the caricatures and his interpretation of them, after which the event will be opened up to questions from the audience. Hopefully, there will be some lively debate around the political and social issues raised, not to mention the characters of Peel, the caricaturist John Doyle and their contemporaries.

Entrance to the event at the Town Hall, outside which stands a statue of Peel, is priced at £3 and tickets are available on the door. Refreshments will be provided and hardback copies of the book, priced at £40, will be available to purchase.

Member of LitFest and the Peel Society will be available at the event should you wish to find out about future events and information for either organisation.

Edited by Dr Richard Gaunt, it gives an illuminating introduction to the sketches and their place in the political history and art history in the first half of the C19th. Each sketch is accompanied by text which identifies the figures in each plate and gives a background to the politics at play behind each image. Alongside the caricatures of Peel we find other major political figures such as Wellington, Grey, Brougham, Melbourne, Palmerston and Russell.

What reviewers are saying:

…while the focus is on Peel, the brilliant conservative politician who dominated the politics of these decades, the other leading figures of the age – Wellington, Grey, Brougham, Melbourne, Palmerston and Russell – make numerous and memorable appearances. This is a book to be enjoyed and savoured by anyone with even a passing knowledge of British politics of the 1830s and 40s, and we will never look at the period in quite the same way again.

Catching the spirit of past ages can be difficult, but this book, with its high production standards, delightful images, and thoughtful text offers a fine view of high politics in the 1830s and 1840s.

Looking for something to do this Saturday – 22nd August?

If you pop over to Tamworth Castle Grounds between 11am and 4pm you can catch up with the LitFest team as we’ve got a stall at the We Love Tamworth event organised by Tamworth Lions.

For more information on the event, please see this Tamworth Herald preview.

We’ll be raising much needed funds with a second-hand book sale and running a family quiz – with a literary theme, naturally – with a prize of £50 worth of Usborne Children’s Books.

You never know your luck, the sun may even come out!

We have a LitFest exclusive!

Former Tamworth resident Jo McMillan – who now resides in Berlin – is coming back to the town as part of the launch of her debut novel Motherland.

Set in late-70s Tamworth and cold war East Germany, this partly autobiographical tale relates how thirteen year old Jess and her mother leave England and head out into the unknown.

Jo will be talking about the book at a ticket-only event at the fabulous Town Hall on 6th July between 7 – 8:30pm.

Tickets cost £2 and can be bought from Tamworth Information Centre on Corporation Street or on the door on the night. Though, note that there are only 50 tickets available. Best get a move on then!

All money raised will be donated to charities chosen by Tamworth Mayor Cllr Maureen Gant, who will be in attendance too.

For more information on Jo and Motherland, visit her website.

We had our very first LitFest event which closed around 4pm today.

It was hard work, but loads of fun and definitely worthwhile.

If you came along please get in touch and let us know what you thought. We really want to hear from you.

Either email us at tamlitfest@gmail.com or add a comment to this item.